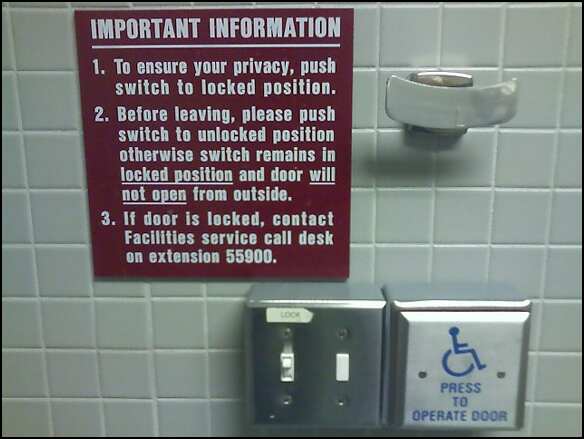 It’s arcane. It’s insane. Tucked away inside of a bathroom in a Baltimore area federal building is the worst user interface I’ve ever seen. It happens to be the user interface for a door lock.

Some of the more tragicomic features of the design:

Figure out what’s painful for you, and then go do that.

You’re a distance running coach. You need to figure out what one of your athletes needs to improve. There are many different kinds of workouts you could use, but these all boil down into roughly three flavors:

So, how do you know which to emphasize for a particular runner? It’s actually fairly simple – you ask the runner what kind of workout they hate the most. Their answer is your answer. In my case, I love long, slow runs, and hate interval workouts. Not surprisingly, I can run for a fairly long time, but I’m not very fast. I need to do more interval workouts.

People gravitate toward their comfort zones, and avoid their pain points. The pain points are typically the areas in which they are weakest and least comfortable. Like many pains, pains born of weakness are cyclical and self-reinforcing. As people avoid their pain points, they become even worse at doing the thing that brings the pain, thereby making it all the more painful, and increasingly less likely to be something that they’ll want to tackle.

Your pain points are probably the things making you the weakest – the things that are holding you back. If you want to be stronger, one of the best things you can do is to break the cycle of pain. You need to go do the thing that you fear the most, which is likely the thing that hobbles your performance the most. Your dread is your compass for success.

I sought out a difficult conversation today. I was afraid of it, and could have avoided it. The weekend was coming up, and I knew I could have run out the clock on the afternoon without confronting it. Yet, I also knew that it was the thing I needed – my workplace interval workout. If I had hidden from it, I would have felt weaker, and the underlying problem would have grown for lack of tending, making it much harder to tackle on Monday / Tuesday / whenever I couldn’t avoid it any longer. So, I made the conversation happen. It hurt some, and I got a little bruised, but I made my lot better by confronting it, and built my confidence that I could handle the thing of which I was (and still am, but less) afraid.

Know what scares you? Then go.