Somebody probably hates you right now, no matter how nice you think you are.

I was recently reviewing evaluations I received for an online course I taught. Two strikingly different evaluations happened to be consecutive in the list. Here’s the first:

Yowza! I must be awful. However, apparently not in everybody’s mind, because here’s the second: 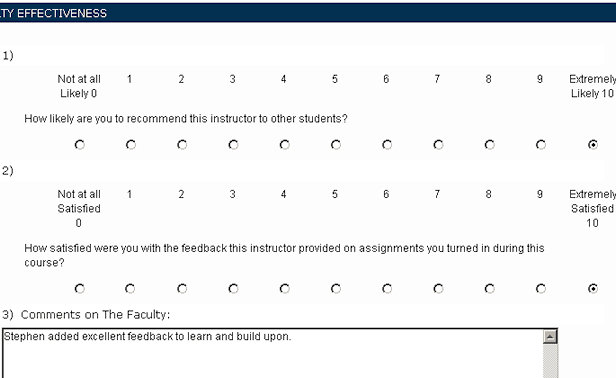 As it turns out, across the 8 evaluations I received, my average grade was an 8, and my median grade was a 9. So, most folks thought I was half-decent, but that one camper was definitely not happy with me.

Here’s my speculation – I pissed that person off somehow. If I had just been not-so-good, I wouldn’t have received the zeros or the scathing commentary. I would have instead gotten poor-ish grades and inspired maybe a sentence about how I’m not worth the student’s hard-earned tuition dollars. A zero, however, is a revenge grade – a totally different ballpark.

Here’s the scary thing – I have no idea why anybody in that class would have given me that grade. I don’t remember any significant conflicts with anybody. As I recall, I was fairly easygoing, and nobody did particularly poorly. Yet, at some point, something I said or did drove this person into a fury, and they vented using the only weapon at their disposal. While the specific mark was engulfed by the numbers surrounding it, its lesson is indelible: sooner or later, we are bound to make somebody around us fuming mad for reasons that are totally mysterious to us. It follows that the people at whom we fume may not always know why we are angry. Your arch-nemesis may think of you as that grumpy person who doesn’t ever say hello.

We experience each other as facets, particularly when we have only limited interactions. It’s hard, maybe pointless, for anybody to fret over all of their facets. Better to aim for a high average and get comfortable with the idea of an occasional zero.

Processes, like systems, have to scale both vertically and horizontally.

We know that the systems we build have to perform under pressure. So, if we’re smart (and not so burdened that we are just barely getting things out the door), we do load testing, concurrency testing, scalability testing and all the other things that help us to ensure that our products can step confidently out of the development ecosystem and handle the workaday rigors of production use.

What about our processes? Often, we test a new process or methodology in isolation, on some low-risk demo project . We see how things work. We fidget, tweak, and tune. Eventually, we add enough and subtract enough get the process humming along, until it’s just right (or at least good enough). Then, we say that we nailed down our process.

However, sometimes we forget that our process has to scale, just like our systems. Can the project management process you defined work for seven simultaneous projects all managed by the same PM? If it consumed most of the PM’s time on your simple demo project, what is going to happen to it when you try to apply it on a program or department level scale? What about those design artifacts you created for the demo project? It was nice to have class diagrams, sequence diagrams, stakeholder profiles and data dictionaries for the demo project, but can you sustain that level of documentation for your marquee product, the one that keeps eight developers continuously occupied?

Your systems have to scale, but your process does too. Use one that you can sustain consistently across the breadth of your concerns, given your available resources. Just because something worked on a demo project does not mean it will survive a collision with the rest of the stuff on your plate. Organizations often design processes for vertical scalability (adjusting the rigor and demands to the size of the effort), but fewer think about scaling horizontally (ensuring that you can still apply the process to many efforts of a similar size).

Already knowing something is a terrible reason for not learning it again.

Last year, I decided that I didn’t like a certain person, based on fleeting observations, cursory interactions, the testimony of others, and a raft of tenuous inferences.

Yesterday, circumstance put me in a position to actually talk with him for the first time. It turns out he’s a pretty good guy – intelligent, interesting, engaged, funny, and self-deprecating without telegraphing a sense of false humility. I was flat wrong about him.

I was surpised by my discovery, but of course, I shouldn’t have been. It’s happened to me before – making judgments based on shaky evidence, and coming to a false conclusion about somebody, whom I then write off, until I am proven dramatically wrong. Based on past situations of a similar nature, I should have known better about being so judgmental – actually, I did know better – but I repeated the mistake anyway.

Knowing something (e.g., don’t judge a book by its cover) and even really believing in it (having some emotional affinity for the knowledge) is quite different from mastering it. Mastering it, to the point where you are consistently faithful to it, takes a good bit of practice. The mere fact that you assent to a given proposition doesn’t make it second nature to you. It only becomes second nature when you purposefully keep it near the top of your consciousness, where you can recollect it readily and then live accordingly.

That’s why trite sayings, truisms, and other fundamentals that we come to take for granted are really very important to hear. For most ideas, repetition and reinforcement are as important as the original learning. While I sometimes chafe at the expression of basic truths / principles, and quietly dimiss those who offer them as unsophisticated, it turns out that I often need a refresher on such truths.  When I was 17, I was fairly good at calculus, but virtually all of that discipline is lost to me today, chiefly for lack of practice with it. I’d hate for that to happen with many other pieces of knowledge that are in principle already known to me.

Sooner or later, I’ll let my recent lesson about snap judgments drift out of memory, and not far after I’ll be doomed to repeat it. Hopefully, after I re-learn it enough times, I’ll get to the point where I finally know it – by heart, so to speak.